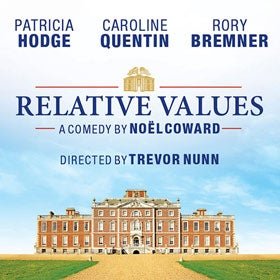 Reviews Summary based on 29 reviews

Recommendations
Anyone:
Families:
Teenagers:
Young Couples:
Theatregoers:
Comedy in the hands of experts
Relative Values is a neat piece of Noel Coward scurrilous fun. As much 1950s class system satire as situation comedy the cast are perfect for the job. In particular Patricia Hodge gives a performance of subtlety, timing and style that carries the whole thing along with effortless elan.
Paul, 22 Mar 2014
Lots of laughs at Relative Values
We loved this very British comedy take on the old class society. Great acting by all the cast.
Keith, 22 Mar 2014