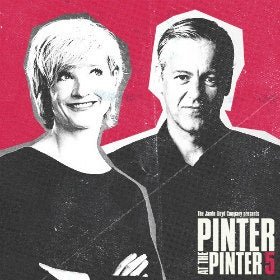 Welcome to the 2018/19 Pinter at the Pinter season, marking the tenth anniversary of the playwright's death. What's on offer? This production, one of seven, features three one-act Pinter classics, The Room, Victoria Station and Family Voices. Victoria Station is a short, funny piece based on radio chat  between a minicab controller and a taxi driver. The driver has stopped, and is concerned that his fare, quiet in the back, is either asleep or dead. The controller wants him to pick up another fare, but he won't move.

Family Voices reveals how so many human communications fall short, causing confusion and pain. Can we ever really know what's going on inside someone else's head? The play stars a mother, her son and her dead husband, the boy's dad. The woman and buy speak to one another through letters and physical dialogue, joined by the dead dad who just wants to stay in touch. Last but not least Pinter’s first play, The Room, is directed by Pinter’s colleague and friend, Patrick Marber, set in a lodging house where Rose and Bert Hudd, who might not actually be legally married, move inevitably towards what looks very much like murder.