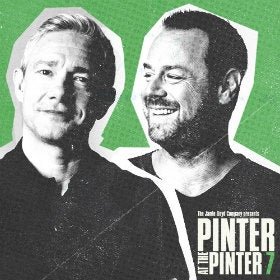 A Slight Ache / The Dumb Waiter

The Jamie Lloyd Company welcomes a brand new series of seven remarkable performances, showcasing seventeen of Harold Pinter's finest one-act plays. It's the Pinter at the Pinter season, and it marks the tenth anniversary of the playwright's demise. The plays are spread across seven separate performances, running between September 2018 and February 2019. And the cast list is almost as much of a draw as the plays themselves, starring brilliant actors like Danny Dyer, Martin Freeman, Tamsin Greig, Jane Horrocks, Celia Imrie, Emma Naomi, Tracy Ann Oberman, David Suchet and Nicholas Woodeson.

All seventeen plays are directed by either Lloyd himself, Patrick Marber, Ed Stambollouian, Lyndsey Turner or Lia Williams, and for this production your plays are the Pinter classics A Slight Ache and The Dumb Waiter, two of his best-loved comedies, both exploring British life in all its eccentric glory. Written in 1957, The Dumb Waiter sees two assassins, Gus and Ben, waiting for their latest victim in a very odd derelict building. In A Slight Ache, written in 1958, a middle-aged couple see their dreams, desires and lives completely changed thanks to a stranger who enters their home. Don't miss them!