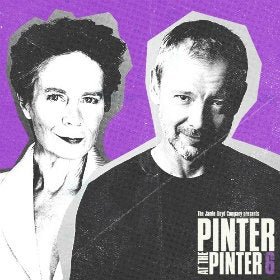 The brilliant Pinter at the Pinter season is set to span the great man's fifty year writing career, a career in which he annoyed and offended the establishment, thrilled the man in the street and managed to pinpoint their differences so cleverly, so painfully, that we have never forgotten him. Ten years after his death, this glittering celebratory season covers everything that's best about Pinter in seventeen different one-act plays, staged in twos and fours across seven unique productions. The stars of the shows include Danny Dyer, Martin Freeman, Tamsin Greig, Jane Horrocks, Celia Imrie, Emma Naomi, Tracy Ann Oberman, David Suchet and Nicholas Woodeson, and the direction comes from Jamie Lloyd himself, Patrick Marber, Ed Stambollouian, Lyndsey Turner and Lia Williams.

Party Time chimes perfectly with today's anti 1% landscape, a  scathingly bitter piece about the unfair power given to the increasingly powerful and narcissistic super-rich. It's set against a horrifying backdrop of oppression by the State, and it has been paired perfectly with Celebration. It's hard-to-resist comedy laughs  at the horribly vulgar and ostentatious materialism displayed by the nouveau riche, the new rich. An evening of top class, irresistible social satire is yours, thanks to a glittering combination of one-act plays that chimes loudly with our times. Get your tickets while they're still available – we smell a sell-out on the way!