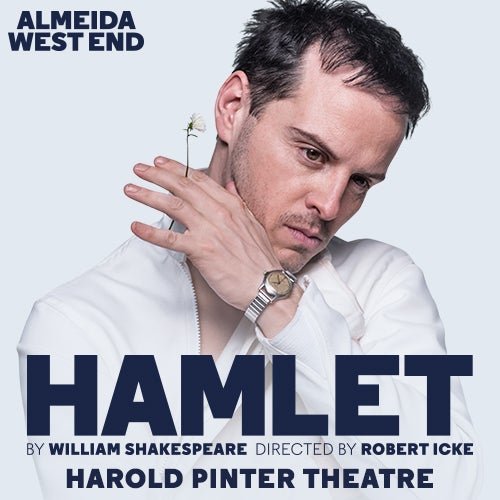 It’s a red hot ticket. It's set to be another West End smash for Shakespeare, our beloved Bard. If only he knew his plays were still thrilling audiences not far short of 500 years after he wrote them. It's Hamlet, and after a sell-out run at Islington's respected Almeida theatre, it's transferring to the Harold Pinter theatre in the West End for early June. TV's Sherlock delivers the starring role in the shape of the awesome Andrew Scott, and the play has been given an exceptional new treatment thanks to director Robert Icke. The show totally sold out at the Almeida, where would-be punters queued at dawn for day seats, something that bodes well for the 12 week run at its new home.

This brilliantly fresh adaptation of strong>Hamlet is being staged in association with Sonia Friedman Productions and this very special event marks Andrew Scott's West End début, a fitting event for such a talented actor. He wowed TV audiences in the Bond film Spectre, and won an Olivier Award for A Girl in a Car with a Man for 'Outstanding Achievement in an Affiliate Theatre'. By all accounts he's an excellent bloke, the man responsible for ensuring there'll be 300 tickets on sale for less than thirty pounds every night of the run because he doesn't want people to be 'priced out.’ No excuses – get yourself to theatreland and drink in that legendary Shakespeare magic!